When I first saw Sudoku Grab from Camera, I thought it couldn’t possibly be the only Sudoku game that you’ll need on your iPhone as the developers suggested. But until you try this app, you are not going to realize how powerful it is. If you are a fan of tackling Sudoku games, you are going to love this one. This application allows you to import any Sudoku game that you see using your iPhone camera. All you have to do is take the picture.

Take this Sudoku game for example: 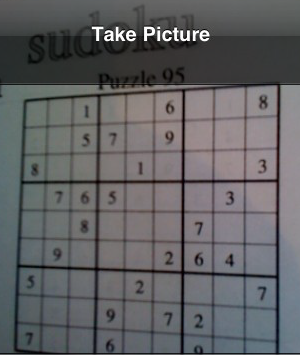 It’s not exactly something you can play on your iPhone. Wouldn’t be nice if you could import it so you can play it while you are on the go? Here is what you get after you have taken the picture and imported the game: 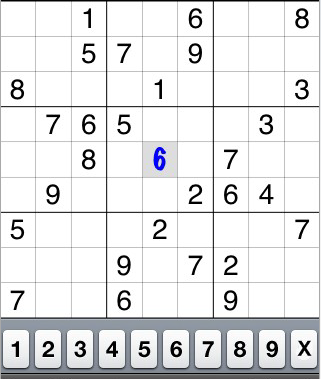 The application uses a sophisticated photo analysis system to identify the location of the puzzle and the numbers on it. That’s all it takes. You can then start playing the game on your phone. Sudoku Grab From Camera is a fully-fledged Sudoku game. You can pencil in your guesses and even have the puzzles solved if you are stuck. It’s not everyday that I get impressed by an app, but Sudoku Grab From Camera truly takes the cake. You’ll no longer have to play Sudoku on a magazine or newspaper. You can always import the games and play them on your iPhone!

Update: a recent update to this cool app now allows iPod Touch users to take advantage of this powerful Sudoku application as well. All you have to do is transfer your pictures to your library, and you are all set. Sudoku Grab just got awfully better.

*some articles might include aff links. Please read our disclosure to find how we fund our network. As an Amazon Associate, we earn from qualifying purchases.
Related ItemsiPhone ApplicationNewspaperpuzzleSudoku
← Previous Story ChessGenius
Next Story → GoSkyWatch Planetarium